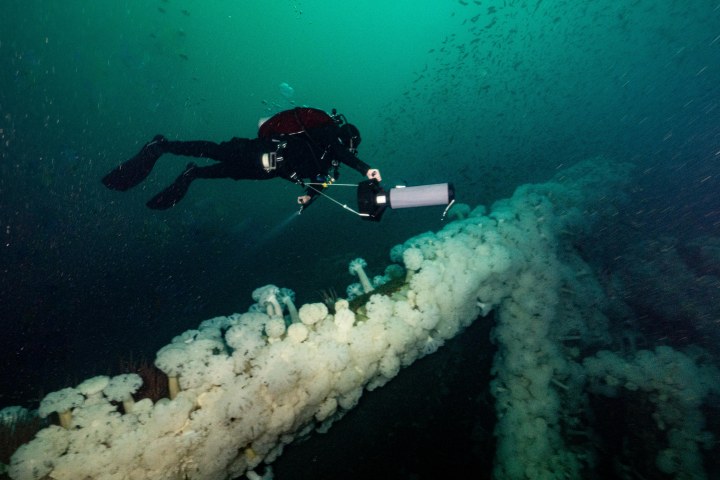 The Missile Tower is a popular technical dive site down near the Mexican border. It has been on my list to dive for quite a while, but I just never quite made it down there. Or, when I was down there I was diving the USS Hogan or the relatively recently discovered Corsair.

The structure was purposefully sunk in 1992 as part of the California Fish & Game Artificial Reef Program. It was originally a Trident Missile test launching platform. The Trident missile is a submarine-launched ballistic missile armed with thermonuclear warheads and launched from nuclear-powered submarines. It was developed by Lockheed Missiles and Space Corporation in the 1970s.

The structure is laying on its side and is about 60 feet long by 25 feet wide by 25 feet high. It is covered in white metridium anemones. You can also enter the “tube” that the missile would be launched from.

My original plan was to create a 3D photogrammetry model of the site, but the pictures didn’t all quite align correctly. Plus, after three laps around the tower, I was started to get a bit winded and that is definitely not a good idea on a rebreather. At some point, I will go back with a scooter and a camera and do it the “right” way.

Conditions were good but the water was a little more green than usual for that spot, according to Tyler. The visibility was good at depth but dark due to a muck layer from 60-100 feet. It was good to be back in the water after a 3 week dry spell.

My camera settings weren’t quite right for the dive and I was mainly shooting for the photogrammetry model so the photos aren’t the sharpest, but they will certainly give you a sense of the structure.