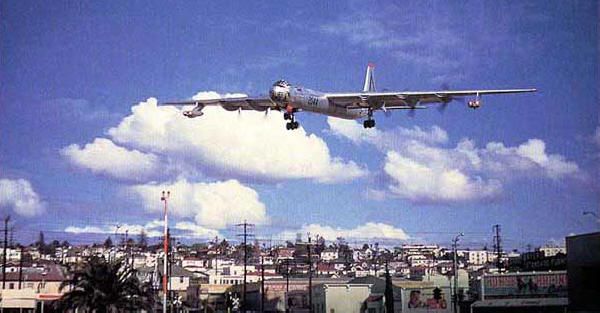 The B-36 “Peacemaker” is an enormous airplane that was designed and built by Convair. I’ve always thought it was an interesting moniker to be called the “Peacemaker” since it was built the be the first bomber capable of delivering any of the nuclear weapons in the massive US arsenal from inside the four bomb bays.

It is really hard to explain just how large this airplane is.

Here are some fun and interesting facts about the B-36:

On August 5, 1952 a B-36 aircraft (S/N 49-2661) was inbound at 4,000 feet for landing at Lindberg Field in San Diego when a fire broke out in the area of the No. 5 engine which then later fell off from the airplane (remember this fact). The aircraft was being flown by David H. Franks who was a civilian test pilot and it had seven other people on board. The fire quickly spread to other areas of the wing and the pilot knew they were in trouble and a crash in the heavily populated area would be devastating.

According to Wikipedia, engine fires in the B-36 radial engines were quite common. In fact, crews had changed the slogan from “six turning, four burning” in reference to the six propellers and four jet engines into “two turning, two burning, two smoking, two choking and two more unaccounted for.”

Captain Franks realized that he needed to get his airplane away from the heavily populated area and quickly turned the airplane out to sea and had six of the other seven crew parachute out to safety.

According to the investigation report, Franks stayed at the controls longer than necessary apparently in order to give other crew a better chance to jump and to direct rescuers to the scene. The last remaining crew member, Kenneth Rogers, tried to get Franks to jump with him but he didn’t. Both Franks and the first flight engineer W. W. Hoffman were never found.

Tyler dug up some of the old newspaper articles and found one on the front page of the San Diego Union that shows a picture of the airplane with smoke trailing out behind it.

The rest of the article continues on page A-3 and shows the column of smoke rising 3,000 feet into the air above the ocean.

Below are a couple of other newspaper articles about the crash.

According to a post in Scubaboard, the main wreck site was originally located in 2004 by Steve Donathan. He never had video or photo “proof” of finding the aircraft and he unfortunately died while diving inside the Yukon a short while later in 2005. A few years ago, Tyler met up with Donathan’s son and reviewed the extensive research notes that Steve had and they had the correct location for the site. We will probably never know for sure, but the circumstantial evidence suggests that he did indeed locate the wreck in 2004.

In December 2008, the UB88 team independently found the wreck and documented it with photos, videos, etc.

The exact location was never publicly revealed but it was later located again in 2015 by Tyler Stalter and Shane Thompson using bathymetry data and information about the depth and approximate location.

The main part of the wreck site sits in about 255′ of water and is a MASSIVE debris field. It is very rarely dived given that the location isn’t published and that it is a relatively deep dive.

In August 2020, Tyler was out searching for other targets and came across what we believe is the Number 5 engine (which had fallen off the wing) with the propeller in the same area. It is far enough away from the main wreck site (over a mile) which correlates with the report that the engine fell off the plane after the fire broke out and it is the right type of engine and the propeller is absolutely massive so it must be from the B-36.

You can visualize the path the pilot was taking as he flew the airplane out to sea and the number five engine dropped off before the plane hit the water further out. It also correlates with the newspaper photo taken from shore showing the airplane banking right with a plume of smoke behind it.

I conducted two dives to photograph and document each site. The first dive was with Drew Wilson on the No 5 engine and the second dive was solo on the main debris field site.

I believe there is some confusion about this “engine.”

Various reports place it at different locations including a report from a CHP officer who said the first engine dropped off just north of Tourmaline Canyon. Note that Donathan mentioned finding a jet engine in 57 feet of water near La Jolla’s Bird Rock. Remember that this airplane was a “D” version that had three radial engines and two jet engines on each wing. Therefore, I’m assuming what they saw and possibly what Donathan found was a jet engine.

Given the type of engine on the wreck site and the size of the propeller and the fact that there is nothing else anywhere near this engine, I am positive that it is from the B-36. The engine and the prop are close to each other but separated by 40-50 feet of sand.

Below are pictures and a link to a photogrammetry model I created of the engine (I wasn’t really shooting photos for a model so it is a little incomplete).

You can clearly see the radial engine structure and the cylinder heads. I’ve also included a picture from Drew Wilson with me illuminating the propeller to give you an idea of the relative size.

(NB: I was using “Auto White Balance” on this dive on the Sony a7r4 and note how closely the color in the pictures “look” like wide angle photos typically shot by Drew who uses the same camera with AWB. I usually shoot with a white balance temperature set to the temperature of my video lights — see comparison to the photos of the main wreck site below).

Here are two photos that Drew took of me lighting up the prop. Some of the blades are bent so it is hard to get perspective, but those blades are fully 19 feet in diameter.

This dive has been “on my list” for quite some time. It is obviously pretty deep so you need good conditions and the timing has to be right. We spent some time looking at the sonar for the general area since the airplane was so big and the debris field is also very large. We dropped the down-line in what seemed to be the “center” of the debris field.

I got to the bottom of the down-line and setup my camera and lights and started to see what I could find. I knew immediately that we had found the target given the amount and size of the debris field I had dropped in on. I wanted to find and photograph something that was obviously belonging to the B-36. I searched for a while and found nothing but various bits and pieces. Deco time starts to add up quickly at 255 feet!

I finally saw some shadows of something with more relief off the ocean floor and found three of the radial engines! They were basically all next to each other like they would be on the wing but there really wasn’t any solid wing structure around. I also saw parts of the props nearby. I photographed all three engines and then made my way back to the down-line and started my ascent and hour+ of deco.

The B-36 had six remote-controlled gun turrets, each with two 20mm guns. Below are pictures of those along with a photo from “Sturmvogel 66” on Wikipedia. During my dive, I ran across two different sets of guns.

There are numerous propeller blades and hubs strewn about the area near the engines.

I saw an interesting shape in the distance and took a few photos of it but we cannot identify it. One possibility is part of the number 4 engine which basically melted.

Given the size of the airplane and the debris field, there are a lot of pieces of aircraft strewn about the site.

As usual, thanks to Tyler for finding the number 5 engine and sharing the location of both sites. Also for the research and information on the back-story.

Thanks to Lora and Chris at Marissa once again for nailing the downline and making 200+ foot dives a lot easier and safer (or I guess twice – once for each location)! 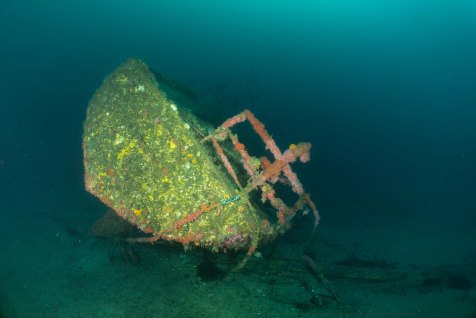 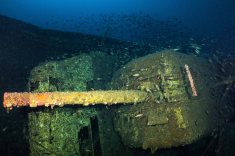 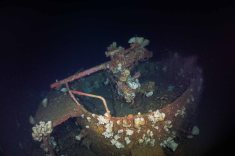 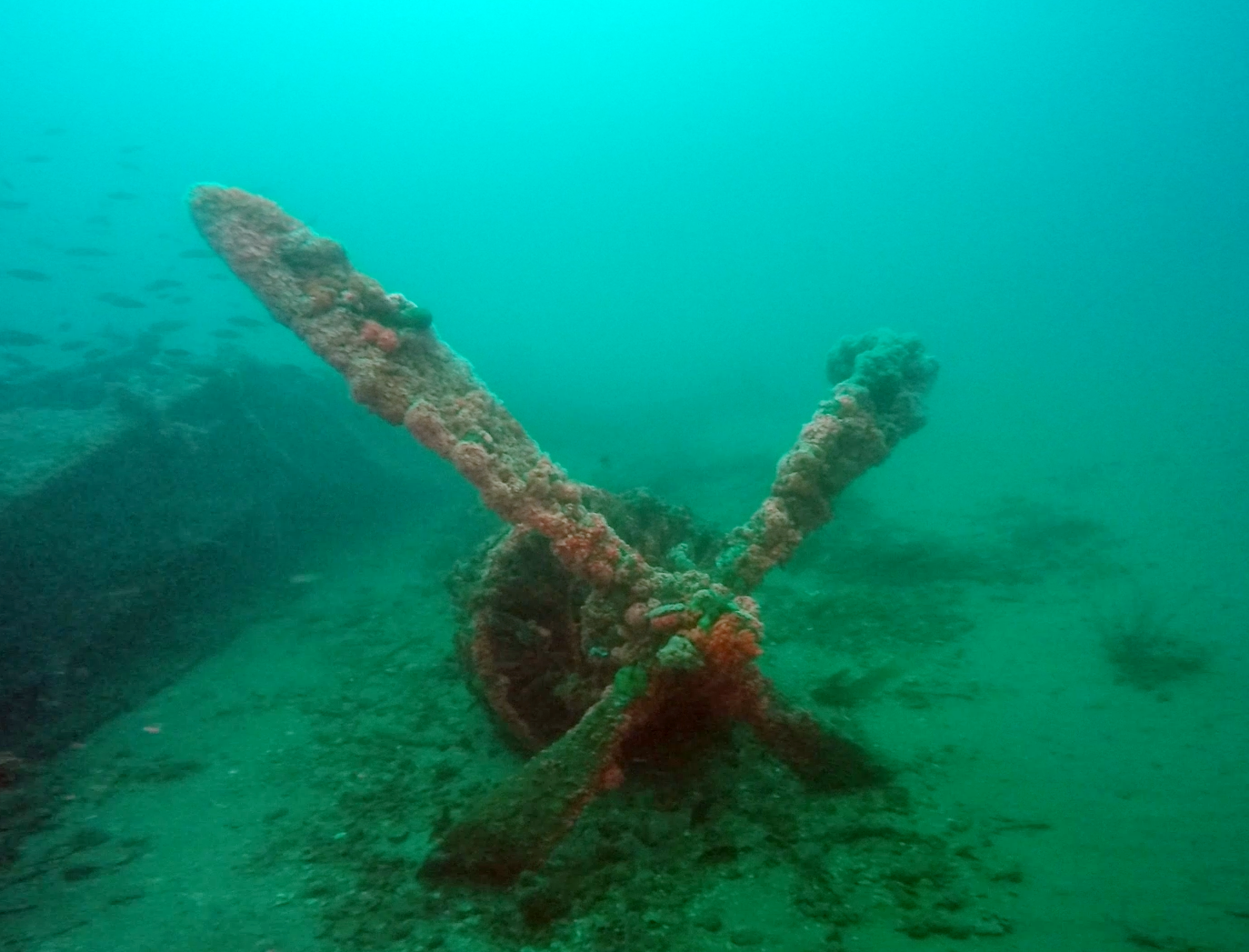 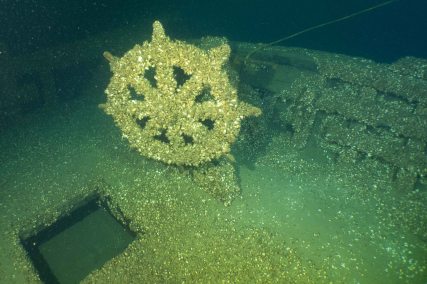